Tentatively scheduled at 9:05a will be local Author Stephen Manson with "The Progressive Connection" 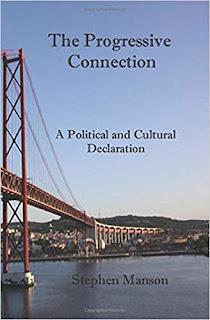 The Progressive Connection is a comparison between the United States and Europe, especially the Nordic countries of Sweden, Denmark, Norway and Finland. These capitalistic democracies with social safety net programs have the highest standards of living in the world and equality is considered one of the most important values in their societies. The new Progressives in American politics are thinking about these ideas in a country they see as only favoring the wealthy and big business. Progressives like socialist ideas with capitalism on how to give the citizens of the country what other people in Europe, especially the Nordic countries, enjoy; health care for all, free college education, equality instead of poverty and slums, and so much more. This change in government could happen in the United States with this information given to the progressive politicians and to most Americans who know nothing about the particulars of this movement. The Nordic countries have high taxes and harsh weather but are the happiest people in the world according to the United Nations yearly report. Denmark has won it for years but in 2018 it was beaten out by Norway and in 2019 Finland came in first. The most important aspect of their happiness is that they have very little stress compared to the United States where chronic stress is becoming a public health crisis. This is a book that should be read by all Americans who have come to think that their country has been changing in ways that are becoming unacceptable to what they think it should be or what it has been in the past.
Posted by www.mynwri.blogspot.com at 4:41 PM